13F week 11…This one is interesting due to the super high concentration.  I don’t follow Lampert with my own $, but I was always curious why investors wouldn’t just buy his stocks and not pay the fees – after all he only owns 7!

CHAPTER 11 – ESL INVESTMENTS, INC.
There are value investors who prefer concentrated portfolios with a small number of high-conviction companies. Then there is Eddie Lampert, who puts that strategy on steroids.

In the first quarter of 2015, Lampert’s RBS Partners held a portfolio of just seven positions, and many of those were related. Sears Holdings represented about half of his $2.1 billion worth of invested assets. Lampert serves as Chairman and CEO of Sears and also has a sizeable chunk of his personal wealth tied up in the company’s stock. Three other RBS positions at the time — Lands End, Gap and Sears Hometown and Outlet Stores — are Sears spinoffs.

Lampert remains undeterred, convinced he will ultimately be proven right at Sears. In a blog he posted on the Sears web site in May, 2014, Lampert wrote, “Turnarounds are challenging, but transformations are even harder because not everyone sees the direction you’re heading in or your destination.”

Lampert has always been iconoclastic in his approach and often made a killing by it. Back in 2004, Bloomberg Businessweek magazine ran a lengthy profile of him that dubbed him the next Warren Buffet. At the time, his investment vehicle, ESL (which manages RBS), had returned an average 29% per year since its founding in 1988.

He performed so well in 2004 that his personal take landed him atop the Rich List of hedge fund managers published by Institutional Investor’s Alpha magazine, which reported that he was the first hedge fund manager to earn more than a billion dollars in a single year.

His headlong foray into Kmart and then Sears has been a bumpy ride. Kmart started out as a big-time distressed debt play. He bought the $23 billion retail chain out of bankruptcy in 2003 for around $1 billion, which gave him access to its generous cash flow and helped fuel his takeover of Sears in 2004.

The Sears gambit has had numerous downs since then and prompted a number of his fund investors to jump ship. But it has also had a few significant ups. Sears stock jumped 18.6% in 2013, a year when Lampert also scored with AutoNation, which gained 25.2%, and Gap, which rose 25.9%. Those gains were enough to earn Lampert a spot at number 14 on the Alpha Rich List with a take that year estimated at $400 million.

Lampert wasn’t always such a singularly-minded investor. He started out in the arbitrage department at Goldman Sachs after graduating from Yale in 1984 with a degree in economics. He left Goldman in 1988 to form ESL when he was 25 years old and practiced a value investing approach not nearly as concentrated as it would later become.

Somehow things seem to turn out in Lampert’s favor despite challenges. In 2003, when he was deep into his bid to take control of Kmart, he was kidnapped by four hoods while leaving his office in Connecticut. Held for ransom in a motel room bathtub, Lampert convinced them that he would pay them $40,000 if they let him go. They did, he called the cops, and then went back and completed the Kmart deal. 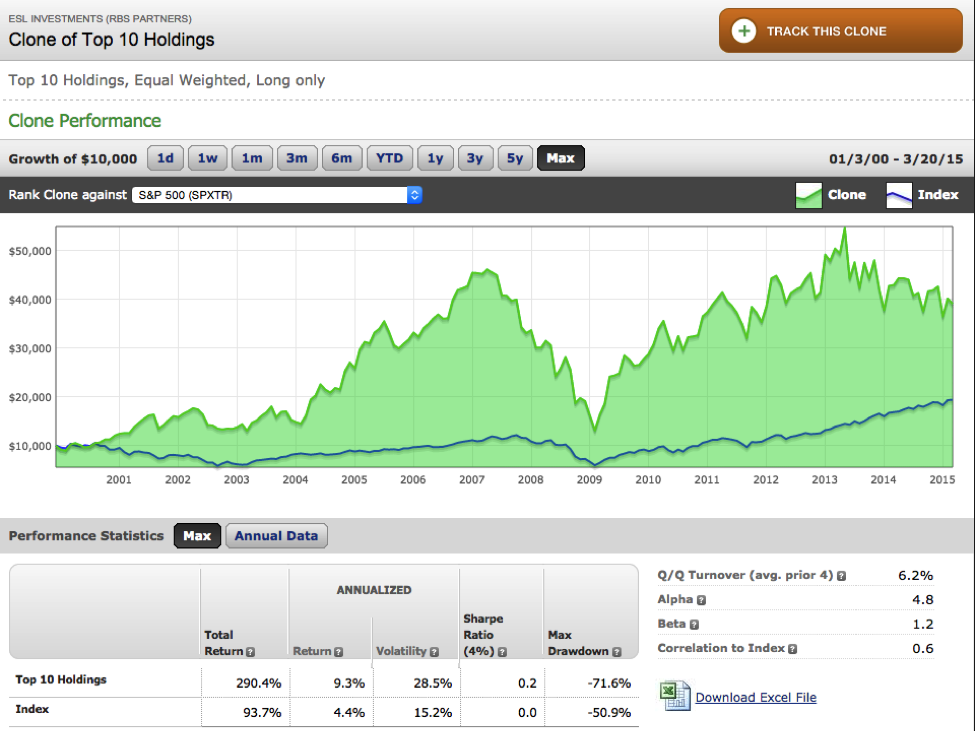