After a great year of performance in 2016, the order for the countries has changed but most macro positioning remains the same.  So, despite the monster moves in Brazil and Russia > 50%, they’re still cheap.  Europe still seems to be a bit of a basket case…and the US is now the 2nd most expensive country in the world.  Here is a fun graphic from our friends at Star Capital detailing 2016 performance: 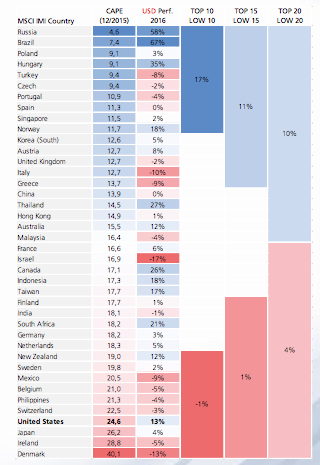 We’ve mentioned this a lot in the past but bears repeating.  We use the MSCI Investable Market Indices below, but MSCI also calculates their Standard Indices too.  IMI includes more companies and in general is more representative of the entire market.  It really makes no difference for any of the countries except the very smallest ones, such as Greece and Egypt.  For both series the CAPE ratios are almost always near identical, with one glaring exception – again, Greece, which depending on the series you use has a CAPE ratio of -17 or 1.  Ha.

So, this is one reason we have always used a valuation composite across the variables below.  If one is giving a screwy result, or perhaps a market has a structural bias to one variable, we want to average it out.  So, in this case Greece is cheapest on CAPD, CAPB, and CAPCF, just not on CAPE.

Anyways, after the monster run in Brazil they’ve moved off the bottom of the barrel for cheapest markets but still in the top 6. The cheap stuff is dominated by the still struggling Europe…

Here it is in Excel too.

Get a Free Subscription!

If you send me an email with a link or attachment to a piece you think readers would love, and I use the piece, I will happily give you $100 off your subscription.  This is worth a free quarter of the Farm at current levels.

Send all emails to mebane@theideafarm.com with “RESEARCH” in the subject line.