Doug Short produces on a consistent basis some of the best charts anywhere.  You can find his handywork on Advisor Perspectives, and this week’s piece is on the big four economic indicators.  (Although he does amazing work with stock market valuations based on Tobin’s Q, TTM PE, CAPE, etc.)

Below is a quote and graph from before the download:

—-
“Official recession calls are the responsibility of the NBER Business Cycle Dating Committee, which is understandably vague about the specific indicators on which they base their decisions. This committee statement is about as close as they get to identifying their method. There is, however, a general belief that there are four big indicators that the committee weighs heavily in their cycle identification process. They  are: 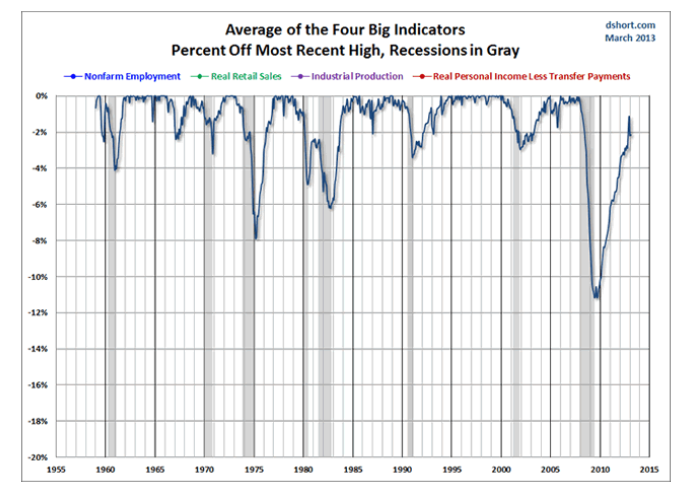 My original dshort.com website was launched in February 2005 using a domain name based on my real name, Doug Short. I’m a formerly retired first wave boomer with a Ph.D. in English from Duke and a lifelong interest in economics and finance. In 2011 my website was acquired by Advisor Perspectives, where I serve as the Vice President of Research.

My first career was a faculty position at North Carolina State University, where I achieved the rank of Full Professor in 1983. During the early ’80s I got hooked on academic uses of microcomputers for research and instruction. In 1983, I co-directed the Sixth International Conference on Computers and the Humanities. An IBM executive who attended the conference made me a job offer I couldn’t refuse.

Thus began my new career as a Higher Education Consultant for IBM — an ambassador for Information Technology to major universities around the country. After 12 years with Big Blue, I grew tired of the constant travel and left for a series of IT management positions in the Research Triangle area of North Carolina. I concluded my IT career managing the group responsible for email and research databases at GlaxoSmithKline until my retirement in 2006.

My interest in economics and financial planning was triggered by the bear market of 1973-74. My wife and I bought our first home in August 1973, a month after our second child was born. Two months later, the Oil Embargo tripled gas prices, and I began commuting to work on a bicycle. During the decade of stagflation, I became fascinated with economics, finance, and market behavior (my wife claims it’s an addiction).

Charting financial data is something I’ve been doing for thirty years. I was an early user of first-generation spreadsheet software (VisiCalc, SuperCalc, and Lotus 1-2-3), and I participated in the beta program for the original release of Quicken.

Contrary to what many visitors assume based on my last name, I’m not a bearish short seller. It’s true that some of my content has been a bit pessimistic in recent years. But I believe this is a result of economic realities and not a personal bias. For the record, my efforts to educate others about bear markets date from November 2007, as this Motley Fool article attests.

I also developed the website for the Raleigh Chamber Music Guild. Unless I’ve been coerced into a vacation, I’m usually watching the economy and markets from my home office in North Carolina.